“Is it going to happen…they need more…is there a hero in Red out there waiting to be revered…they’re now creating chances for fun…what we need now is the fourth official to hold up aboard with about 20 in it…we’re in the last of the ninety minutes…it”s not over until it’s over…the last final assault…deflected.

“Time for a corner. Can Manchester United score? They always score. Peter Schmeichel is forward. Beckham in towards Schmeichel, it’s come for Dwight Yorke, cleared, Giggs with a shot. SHERINGHAM!……..

“Name on the trophy. Teddy Sheringham with 30 seconds of added time played has equalised. They are still in the European Cup. Oh Teddy, Teddy. Extraordinary climax in the Nou Camp stadium…as things stand we will go into
extra-time with the golden goal hanging like a massive shadow over this final.

“Unless Ole Solskjaer can conjure up another. You have to feel this is their year. Is this their moment? Beckham, into Sheringham and Solskjaer has won it! MANCHESTER UNITED HAVE REACHED THE PROMISED LAND… and the Treble looms large.

“We’ve needed a good European Cup Final for a while…what must Mattheus be thinking. With the greatest of respect, who cares? Now is that it – or is there something more…history is made.

“Memories are made of this forever and a day. United fans will ask ‘Where did you watch the 1999 European Cup Final? Where did you see Ole Gunnar Solskjaer win it with virtually the last kick of the final?’ And 50,000 or so will be able to say ‘I WAS THERE.’” 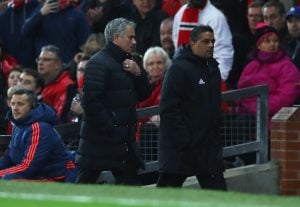